Javier Ávila Presents: The Trouble With My Name 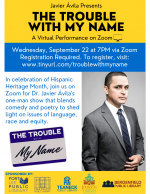 Join us on Zoom for Dr. Javier Ávila's one-man show that blends comedy and poetry to shed light on issues of language, race and equity.

Javier Ávila (San Juan, Puerto Rico) has received the Poetry Prize from the Institute of Puerto Rican Culture for "The Role of the Deceased (2010), the National Poetry Prize conferred by the PEN Club for "The Symmetry of Time" (2005), and the Olga Nolla Poetry Award twice, for "Hidden Glasses on the Carpet" (2003) and "The Symmetry of Time" (2005). The success of his acclaimed novel "Different" (2001) transcended to the cinema with the film Lie (2009). Two of his other novels, "The Professor in Ruins" (2006) and the controversial "The Most Ancient Profession" (2012) explore the underworld of Puerto Rico. His collection of poems "Creature of Oblivion" won another PEN Club award in 2008. That year Ávila also won the prestigious Outstanding Latino Cultural Arts, Literary Arts and Publications Award from the American Association of Hispanics in Higher Education. His bilingual anthology, "Vapor" (2014), brings together poems by his four laureates of poetry. His most recent novel is "Dust", a thriller about the life of a womanizer who becomes a murderer. Avila is the only Latino to be selected the Pennsylvania Teacher of the Year by the Carnegie Foundation for the Advancement of Teaching and the Council for Advancement Support of Education.

Since October 2016, Ávila has presented his show on the Latino experience in the United States, "The Trouble with My Name", in more than 150 cities.